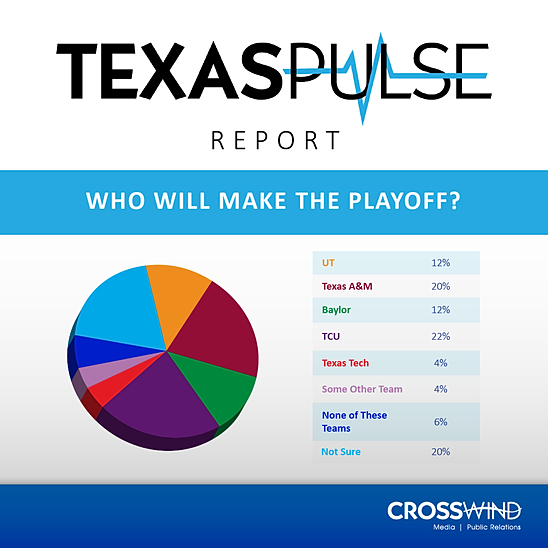 Texans love their college football, and there are 12 Texas teams eligible to participate in the FBS playoff system. The Texas Pulse surveyed Texans on which teams they think are most likely to make the playoff in 2015. TCU, which is the highest-ranked Texas team in national sports polls, had the highest support with 22%, followed by Texas A&M at 20%.

An equal number of Texans chose the University of Texas and Baylor (12%), although Baylor is consistently ranked higher nationally than the Longhorns. (This poll took place before UT’s second loss of the season). Men (29%) were far more likely than women (18%) to pick TCU, but women (6%) were more likely than men (2%) to pick Texas Tech. The age group consisting of college students (respondents 18-34) was far more likely to pick UT (24%) than were respondents who were 40-65 (10%) and those over 65 (2%).

Conservatives chose TCU (25%) and Texas A&M (23%) far more frequently than they chose Baylor (12%) or Texas (9%). Liberal Texans were more likely to choose the Longhorns of UT (24%), a school with a liberal reputation, but almost as many (20%) chose Texas Tech, a school with no such reputation. Those without high school diplomas more often chose A&M (44%) and UT (26%), while giving a poor chance to the two top-polling teams, TCU and Baylor (both 5%). TCU, however, picked up support from a solid 34% of Texans with postgraduate experience. More than a third of Texans making over $200,000 (37%) think TCU will make the playoff, but only 3% of the wealthiest Texans would bet some of that money on UT.

An A&M and UT matchup in football this year is unlikely, unless the 24% of liberal Texans who picked UT and the 23% of conservative Texans who picked Texas A&M to make the playoffs are both right. The storied rivalry, however, is still on the minds of Texans, with 62% saying the two schools should play again and only 13% saying no.