Texans negative on Obama, positive on Abbott, mixed on Cruz

Texans negative on Obama, positive on Abbott, mixed on Cruz 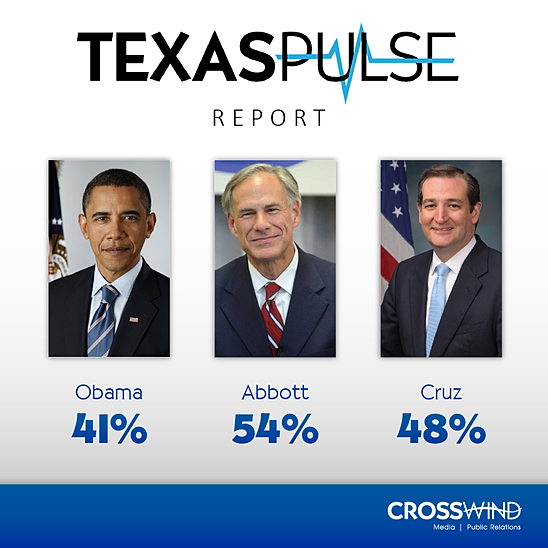 Crosswind’s Texas Pulse found a majority of Texans (58%) see President Barack Obama unfavorably, compared to 41% who see him favorably. Opinions about Obama remain highly polarized, with only 10% of Republicans in Texas viewing him favorably, while 88% see him unfavorably. This compares to 86% of Democrats who see the president favorably. Republican opposition is strong, with 74% registering very unfavorable opinions.

Because Texas Senator Ted Cruz is also seeking the Republican nomination for president, Texas Pulse sought to gain better insights into Texans’ views on the junior senator from Texas.  In future surveys we will look at Senator John Cornyn as well.  Sen. Ted Cruz is virtually tied on favorability in Texas, with 48% of Texans viewing him favorably and 47% viewing him unfavorably.

Cruz does well among Republicans, but not as well as Abbott, with 72% supporting Cruz while 77% support Abbott.  Unlike Abbott, who is seen positively by a quarter (24%) of Democrats, only 13% of Democrats see Cruz favorably. Democrats strongly oppose the junior senator from Texas, with 80% rating him unfavorable, among them 66% who see him very unfavorably.