Texans excited to see Blue Bell back on shelves

Texans excited to see Blue Bell back on shelves 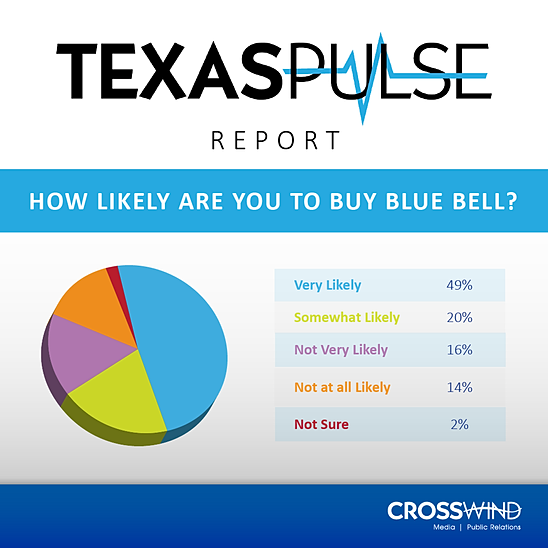 One of Texas’ most beloved brands, Blue Bell Ice Cream, recently emerged from a recall of its products due to a multistate listeria outbreak tied to the ice cream. How do Texans feel about the Brenham-based company in the wake of the outbreak? The Texas Pulse surveyed residents of the Lone Star State about whether they would buy Blue Bell now that it is back in the freezers at their local stores. Overall, almost half (49%) of poll respondents said they were very likely to buy Blue Bell, and a further 20% said they were somewhat likely.

Blue Bell is more popular among whites (70%) and Hispanics (67%) than among African-Americans (62%). Men (70%) are slightly more likely than women (67%) to crave Blue Bell, though the study did not specifically ask pregnant women, who might be more likely to answer yes. Parents with children at home were more likely (71%) than those without them (68%) to buy Blue Bell. Texans making over $200,000 were among the least likely to buy Blue Bell, though still well over a majority at 59%. The poll did not ask whether respondents were on a diet, and the lack of this crucial information may be responsible for disparities in the poll responses.