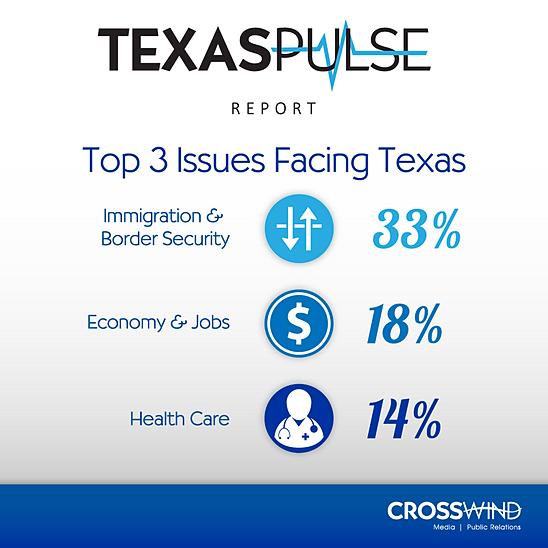 A statewide poll of Texas likely voters finds that immigration and the economy are the top issues of concern for residents of the Lone Star State.

The Texas Pulse, a periodic survey of Texans’ opinions on a variety of cultural, economic and political issues, was conducted by Crosswind Media & Public Relations from Sep. 11-14, using a survey of 1,000 Texans. The margin of error is +/- 3 percentage points.

The Texas Pulse surveyed what Texans believe are the most important issues facing the country, with each respondent selecting the one issue considered most important. The topics chosen for this survey include items in the news, as well as issues designed to match previous surveys to allow a determination about how attitudes shift over time.

Immigration and border security continues to be cited as the most important issue facing Texans. One third of Texans cited it as their top issue, statistically the same as in the November 2014 Texas Pulse survey (35%). Responses regarding this issue, however, are very partisan, with 50% of Republicans citing it as their top issue while only 10% of Democrats identified it that way.

To receive a copy of the full Texas Pulse survey or for more information, visit https://crosswindmedia.wpengine.com/texaspulse