Golden Globes Instagram or Ellen’s Selfie? Which was better?

Golden Globes Instagram or Ellen’s Selfie? Which was better?

For the second time in 12 months, social media has been used to bring viewers to an event they may not otherwise be watching: Instagram photos of Golden Globe winners were taken as each celeb was ushered off stage and then immediately uploaded to @GoldenGlobes Instagram account. The backdrop was simple glitz – golden streamers that suitably underscored the occasion’s glitter. Using an Instagram “booth” gave the celebrities some freedom to be as personable as they liked. It made for good single, portraits, as well as cast-and-crew group shots. The photographer was well-known and trusted in celebrity circles. 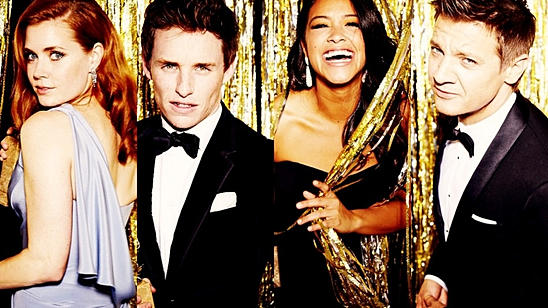 Compare this to Ellen Degeneres’s famous celebrity selfie at the Oscars last March. Ellen got the likes of Meryl Streep, Angelina Jolie and Bradley Cooper – and many others — to cram in front of a Samsung Galaxy 3 to create what became the most retweeted (2.4 million) Twitter post in history: by 10 a.m. CST the next day, over 8 million DIFFERENT users saw the tweet from some form of Twitter app. (Its success brought Twitter to its proverbial, cyberspace knees – causing the Academy to issue an apology and perhaps bringing even greater attention to the original Tweet). 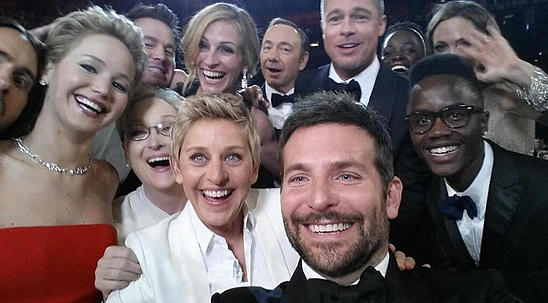 Both demonstrate a brilliant, yet simple, use of social media. Ellen’s selfie leveraged a live television audience, bringing it to everyday folks in their living rooms, or online. It conveyed a spontaneity that in reality did not exist – it required a great deal of planning and collaboration, including cooperation from the network – which, given the Samsung connection, probably wasn’t difficult to secure. The Golden Globes photos provided intimate, candid portraits of our favorite celebs, delivering their personalities to our smart devices with understated yet still-evident glam.

Which gets your vote? By now, everyone is aware that the Ellen selfie was a product placement stunt, and a very successful one. Samsung’s advertising firm claims that one selifie was worth between $800 million and $1 billion dollars to its client because it is akin to a word-of-mouth endorsement. Yet the stunt itself was low-key in its commercialism; no logo or brand information was apparent. Do you think the 37 million people who saw the tweet, and the 43 million people who saw the broadcast, are more likely to purchase that Samsung Galaxy as a result of that selife?

And what did the Golden Globes photos do for you? Are you more inclined to watch any of the actors’ movies because of them?

Weigh in, and we’ll post the results. One thing is for sure: there will likely be copycats. It will be interesting to see how many new twists agencies and event planners can invent to keep social media new and refreshing, instead of another tired tool of commercialism.