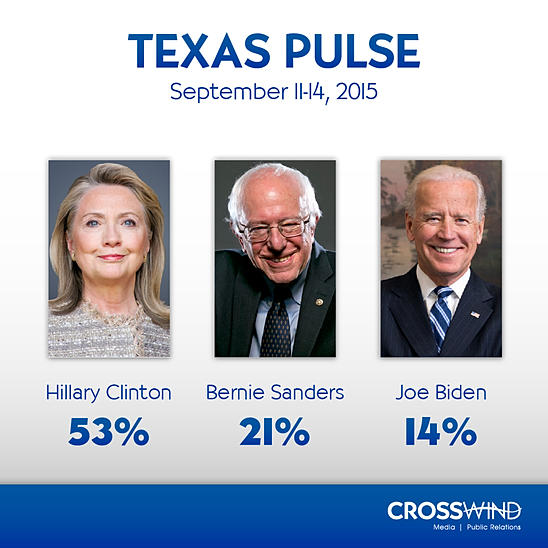 A statewide poll of Texas likely voters finds that immigration and the economy are the top issues of concern for residents of the Lone Star State. The poll also found that Donald Trump and Hillary Clinton lead the Republican and Democratic primaries. Barack Obama is viewed unfavorably by a majority of Texans. Gov. Greg Abbott is seen favorably, and Sen. Ted Cruz has a more mixed favorability rating.

The Texas Pulse, a periodic survey of Texans’ opinions on a variety of cultural, economic and political issues, was conducted by Crosswind Media & Public Relations from Sep. 11-14, using a survey of 1,000 Texans. The margin of error is +/- 3 percentage points. A 2014 Texas Pulse survey was recognized by the Houston Chronicle as the most accurate poll in the governor’s race.

In a survey of 452 likely Democratic voters, Clinton leads Democrat Bernie Sanders 53 percent to 21 percent, with Sen. Joe Biden, who has not announced for president, in third with 14 percent in a hypothetical matchup.

“Despite some challenges, the Clinton name is still gold among Texas Democrats,” said Thomas Graham, Crosswind president and CEO. “Hillary’s support remains solid, particularly among minorities and women. While Sanders fares well among white and younger voters relative to his overall numbers, Hillary Clinton still beats him 2-1 in even these categories.”

On the Republican side, as Crosswind announced last week, Donald Trump leads the field with 26 percent, followed by Ben Carson at 19 percent. Texas’ own Senator Ted Cruz is third with 15 percent, and Jeb Bush is fourth with 9 percent.

The Texas Pulse survey of key issues finds that immigration remains the top issue among voters, with 33 percent citing it as their biggest concern. This is a decidedly partisan issue, with 50 percent of Republicans saying it is their top concern, but only 10 percent of Democrats identifying it that way. The economy and jobs is a distant second at 18 percent for all voters.

Abbott fairs only slightly better among members of the other party. His overall favorability is 54 percent positive and 39 percent negative. Among Republicans, he is seen favorably by 77 percent, compared to 24 percent of Democrats who see him that way.

“It’s clear that both parties recognize the value of engaging Hispanic voters and the results of their efforts show in the equal favorability ratings among their respective candidates,” said Graham.

Crosswind will release the complete findings of the latest Texas Pulse on Oct. 1. To receive a copy or for more information visit www.crosswindcommunications.com/texaspulse or email Crosswind Vice President James Bernsen at [email protected]