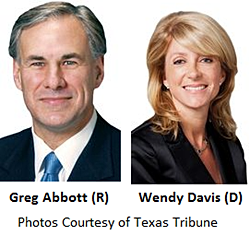 Austin, Texas – October 22, 2014 A poll conducted by Crosswind Media and Public Relations shows Republican Greg Abbott leading Democrat Wendy Davis by 52.4 percent to 31 percent in the race for Texas governor, with 16.2 percent of voters undecided. The live telephone survey of 500 likely voters was conducted Oct. 9-12. The margin of error for the poll was 4.33 percent.

“Greg Abbott has a commanding lead and has successfully motivated the Republican base,” said Crosswind President Thomas Graham. “Texas remains a red state, at least among likely voters in non-presidential years, and Wendy Davis does not appear to have made a dent in that strength.”

The poll found that 46.2 percent of likely voters identified with the Republican Party or the Tea Party. Only 23 percent of voters identified as Democrats. James Bernsen, Crosswind’s Vice President for Government Solutions, said that these numbers reflect a higher enthusiasm for the election among Republicans.

The upside for Wendy Davis? The Democrat performed slightly better than Abbott among Independents. 18.4 percent of likely voters identified themselves as Independents. Among these non-aligned voters, Davis outperformed her party by 8 percentage points, compared to 6.2 percentage points for Abbott. But the difference is statistically small, Bernsen noted.

“Wendy Davis’ best hope for this election was a large turnout among Democrats and a significant lead among Independents” Bernsen said. “Neither of these trends appear to be panning out.”

Bernsen said the race could tighten as Democratic get-out-the-vote efforts come into play, but without a major downswing in Abbott’s numbers, this would not likely alter the outcome significantly given the lack of enthusiasm shown in this poll.

“Wendy Davis needs Greg Abbott to pull a Clayton Williams, and she continues to hit him with negative ads trying to get a response,” Bernsen said. “Abbott’s campaign has shown remarkable discipline to this point. With early voting now underway, almost nothing will change the results even if he did make a mistake.

The poll also tested Texans’ attitudes on key issues facing the Lone Star State. Given a number of choices, but also an open-ended question, fully 35 percent of Texans surveyed cited Immigration or Border Security as their top issue. Education received the top nod from 17 percent of Texans. The economy was next with 13 percent, followed by social issues, 12.8 percent and federal government regulations, 4.8 percent.

Crosswind Media & Public Relations does not manage political campaigns, nor is not affiliated with any candidate on the ballot.