In this issue of Branding Texas: FoC (Friend of Crosswind) Adm. Brett Giroir becomes testing czar; a nation’s health looks toward recovery; Southwest Airlines in survival mode with its wings clipped by nationwide drop in flights; our pride and joy H-E-B earns national praise; and Netflix documentary remembers when ZZ Top crossed the state’s borders to make all things Texas cool again in America – four years before the film Urban Cowboy made Gilley’s a national shrine. 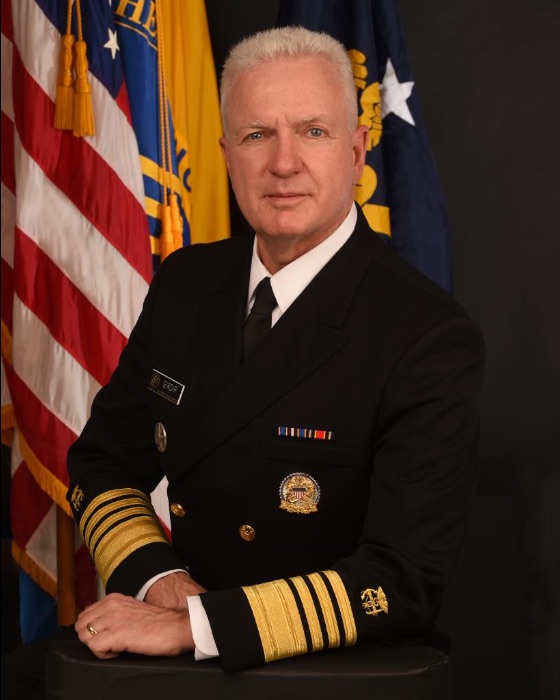 It came to no surprise to any of us at Crosswind Media & Public Relations that President Trump named Assistant Secretary of Health Adm. Brett Giroir as the testing czar of the White House coronavirus task force earlier this month. We counted Dr. Giroir as a client when he spearheaded the A&M University Health Science Center, positioning Texas as a leader in biodefense and vaccine manufacture. International media attention helped secure an HHS BARDA (Biomedical Advanced Research and Development Authority) grant, creating the Center for Innovation in Advanced Development and Manufacturing (CIADM) at the A&M System to become a hub of vaccine production and bioterrorism. It’s my belief that CIADM is as important to our national health security, as fracking has been to our energy security and independence.

How we recover a nation’s health.

It’s hard to see it, but I believe we are now at the pivot point in this great global pandemic when countries that have responded aggressively are beginning to see results. The crisis is far from over, there are many deaths to come in cities and regions of the world that have not been significantly impacted. But the time to make concrete plans for restoring the U.S. healthcare system, the economy and our lives is now. It’s only fitting that the most practical and aggressive national coronavirus recovery plan comes with the imprimatur of a true Texan, former CMS Administrator Dr. Mark McClellan M.D. and his pals at the American Enterprise Institute. Mark, born right here in Austin, is a visiting scholar for AEI but is now mostly in Washington D.C. where he runs the Margolis Center for Health Policy. Mark is an honors graduate of UT Austin, an M.D. from Harvard, and a Ph.D. from MIT. He is, to my mind, the smartest analyst of health economics on the planet and it shows in the careful, but wise report that AEI has put out. The AEI plan calls for reopening state by state and times the gradual removal of physical distancing rules, to be replaced by tested surveillance tools, therapeutics and vaccines that are on the way to mitigate risks.

It’s worth mentioning here, that even though this has not (yet) been reported on nationally, Mark’s foresight mirrors that of another Texan: Nueces County Judge Barbara Canales and her brilliant idea of “Operation Code Blue” to revive South Texas’ coastal economy. A product of a physician father and enamored with the medical field herself, Judge Canales selected the term Code Blue to indicate the immediate need for patient – in this case economic – resuscitation. The program’s mission “is to revive our South Texas Coastal Economy by safely restoring and strengthening our large and small businesses, and providing need-based aid to Coastal Bend businesses, employees and families, with a carefully measured strategic, executable and affordable plan.”

This is a wonderful example of bi-partisan leadership guiding a model that can and should be implemented on a national level. 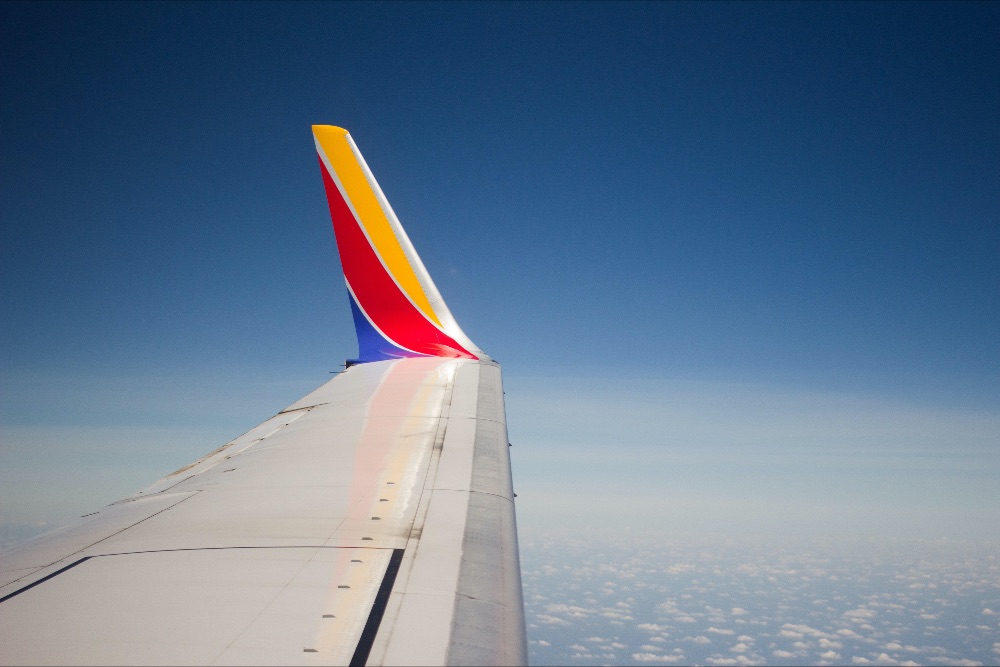 Will the national airline of Texas, Southwest, survive canceling so many flights?

I would argue that most of what Americans who live outside our Lone Star state know about Texas they learn on flights on our very own national air carrier, Southwest Airlines – either reading the in-flight propaganda (“93 Days of Summer!”) or chatting with the onboard crew who aren’t beyond affecting a Texas drawl during flights (when they really come from Boston or San Diego or Sioux Falls). Planes across America are emptying out now that the nation’s traveling seniors are locked in their bedrooms by their adult kids and corporate road warriors are mostly grounded. So Southwest Airlines said last week it was  canceling nearly half of all of its flights; at last count, 1,500 flights were canceled by Southwest which, in normal times, offers about 4,000 daily flights. 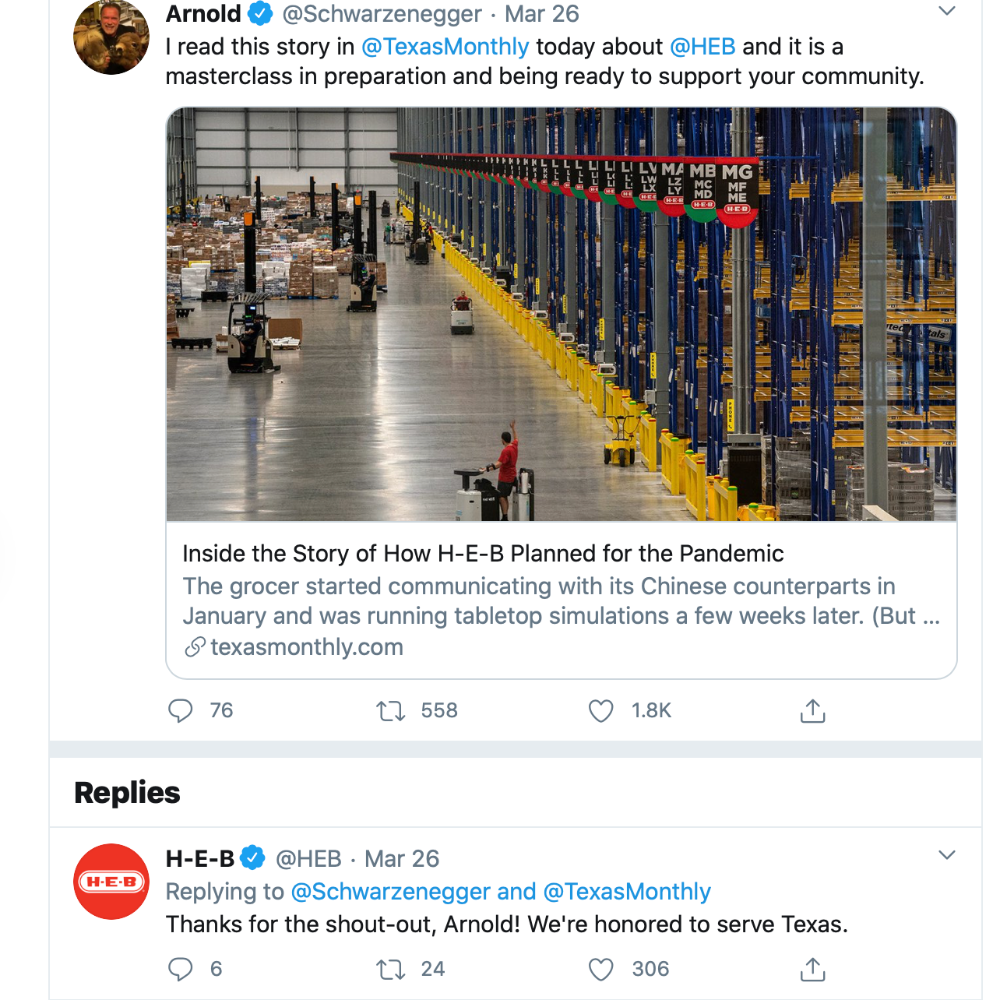 H-E-B wins over fans outside of Texas.

The largest privately owned company in Texas for many years wasn’t Dell, but grocery chain H-E-B, which in reputation inside the state still ranks right up there with Ma, the first pony you ever rode, and the Lone Star flag. The more-than 350 H-E-B stores are still mostly all in Texas – a brief foray into Louisiana before the turn of the 21st Century didn’t pan out – but there are 50 or so of that total south of the gringo border in Mexico. So H-E-B has been a pleasure-kept secret from the rest of the U.S. population – until now. A story in Vice this week by Hannah Smothers, a Brooklyn, NY-based writer (okay, she’s a former Texan and UT Austin grad), praises the San Antonio-based chain for its aggressive and very early responses to the COVID-19 pandemic. Says Smothers: “HEB’s list of coronavirus safety measures is long and thorough, and more stores—especially in places with already high confirmed coronavirus cases—should be doing exactly what the Texas chain already has.” The Texas-only grocery chain was preparing an emergency response plan as far back as 2005 and was implementing it in the second week in January, when the disease began popping up in China. Among the chain’s fans? Former California gobernator Arnold Schwarzenegger who tweeted on March 26 that H-E-B’s early implementation of safety measures was “a master class in preparation.” Arnold is upset at his own state these days. As Republican governor 14 years ago, acting in the wake of global bird flu panic, he built up a surge capacity stockpile that included mobile hospitals and medical gear to prepare the state for future pandemics. Democratic state lawmakers in the Golden State withdrew funding to maintain the supplies. H.E.B., by the way, doesn’t really stand for “Here, Everything’s Better.” Those are the initials of the founder, Howard Edward Butt, the store’s founder. His wife, Florence, put up $60 in 1905 to open the first store in Kerrville, Texas. 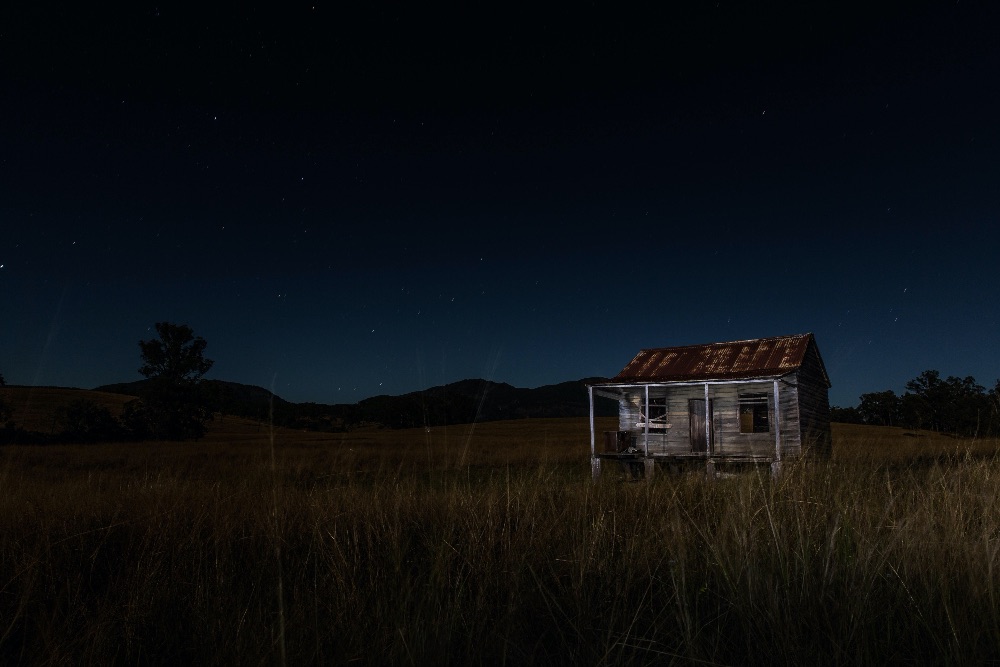 When ZZ Top made Texas cool again in America.

Anyone middle-aged remembers when the movie Urban Cowboy, released nationwide in 1980, made Gilley’s dancehall in Pasadena TX and all things Texas cool again in America. But the real image warriors who put the shine on the Lone Star and changed minds around the nation now turns out to be our very own ZZ Top. While you are homebound for the pandemic, do not fail to watch the documentary That Little Ol’ Band From Texas now streaming on Netflix. We who live here loved ZZ Top for their endless and affordable runs up and down the state – the band was mostly from the Houston area but, in the early days, played any bar or feedlot in Texas that paid them in greenback cash. Long forgotten, though, was their smash 1976-1977 Worldwide Texas Tour that filled arenas, stadiums and auditoriums around the world, styling hats and boots and whiskers everywhere it went. Guitar World called the run “one of the most ambitious and bizarre tours in all of rock history.” The boys had steer skulls and even a live buffalo and a bellowing real longhorn on stage in some performances, plus a 35-ton stage in the shape of our beloved state. The tour’s 18 months and 89 shows played to an audience of 1.2 million – and set a world record at the time. Pardon me while my self-confined family and I dance across the living room to La Grange!