In this issue of Branding Texas: Typically this space provides a run-down of the global or national headlines as they relate to news about Texas, but this issue we intend to devote to our now annual survey of the state of the brand of the Lone Star State.

Despite headlines, Crosswind’s Annual Brand Study Shows Most Americans Agree – Texas Has In Fact Not Gone To Hell.

Upon being rejected by Tennessee voters in his bid for the U.S. Congress Davy Crockett famously exclaimed, “You may all go to hell, and I will go to Texas.”

If you were to read many of the headlines about our state of late, you might believe it was Texas that has gone to hell. 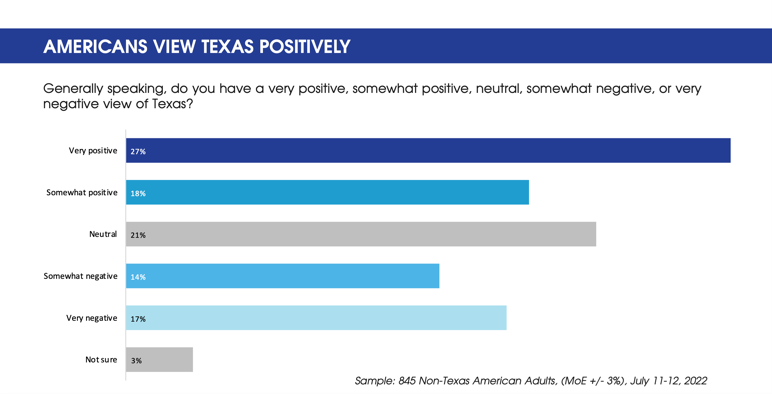 Most of the national news coverage on Texas has centered around issues like potential power grid failure, border security, and the aftermath of the tragic school shooting in Uvalde. With these as the headlines, you might be surprised to learn that our Texas Brand Survey results show a good number of Americans actually believe Texas is doing all right, and that we here in Texas have in fact, not gone to hell, especially when compared to the rest of the country.

We surveyed 845 respondents, all non-Texas adults from other U.S. states on July 11-12 to gather their current thoughts and feelings about Texas.

What we found in the research is most Americans outside the state continue to hold a positive view about Texas being a good environment to start a business (53%) and raise a family (52%). When it comes to Texas’s business environment, only 11% of people surveyed had a somewhat bad view, and 12% held a very bad view.  Additionally, only 14% of survey participants held a somewhat bad view of Texas being a good state to raise a family, with 18% of Americans having a very bad view.

Despite conducting the survey in the midst of these national negative headlines overall, the state of Texas brand continues to be strong and durable. 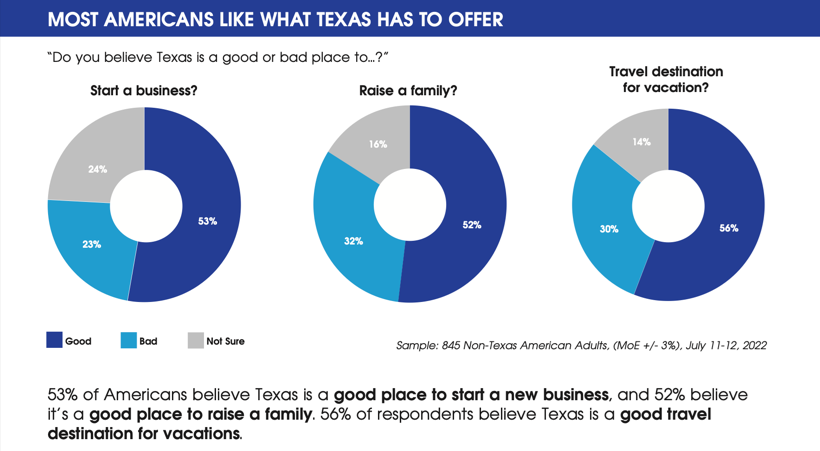 I had a terrific conversation with my friend Chris Tomlinson of the Houston Chronicle who reported on our survey in his business column: What do outsiders really think of Texas? A new poll has some surprising answers.

When Thomas Graham texted me about an opinion poll revealing what outsiders really think about Texas, I asked the public relations executive to send me the details.

While I found negativity in many of the findings, he found reasons for optimism in others.

“These numbers might as well be a Rorschach,” [Tomlinson] wrote in an email.

The Numbers that Tomlinson expressed concern about are those 31 percent who have a very negative or somewhat negative view of the state. The rest were neutral or not sure.  Furthermore, outsiders were evenly split on whether Texas is going in the right direction: 38 percent said yes; 38 percent said no.

Tomlinson went on to write:

Those numbers looked dismal to me, proof that Texas’s reputation was slipping. But Graham pointed out that a New York Times poll found that only 13 percent of registered voters thought the United States was going in the right direction.

However, when you consider the factors that matter to the daily lives of Americans, I explained, the job they have, the entrepreneurial opportunities they consider, the family they’re trying to raise, where they are going to spend their vacation, there is a generally positive sense around Texas.
The Financial Times highlighted the continued business migration to Texas. The report points out that since 2010, Texas has had a higher job growth compared to the rest of the U.S. The article also points out the growing cities in Texas and new business coming to Texas.

CNBC also published with its annual study on the top states for business in America of 2022. Texas ranked 5th  overall, 2nd in workforce and 4th in technology and innovation. CNBC did however add 22 social factors to this year’s study playing into the social issues that were among the negative headlines highlighted in the state of Texas, factoring into the lower rankings.

Our research further enforces Texas’ reputation of being a great state for new business and economic growth.  But it also offers some very optimistic insights about the future: Americans aged 18-39 are the ones feeling the most positive about Texas and how our state is a great place for business, travel, and raising a family.

And those attributes – business, family and vacation – were most popular among Blacks and  Hispanics.  Despite being perceived as not any more or less diverse than the rest of the country, Texas is in fact a majority-minority state, and Houston is the nation’s most diverse city.  As a result of these factors and the positive view held by these younger Black and Hispanics, I believe we as state are on the verge of becoming a multicultural superpower. Brands, business leaders and those interested in political influence would be wise to take heed.  The Texas brand is strong, durable, and resonant.

Methodology:
In this survey of 845 non-Texas adults across the United States, there is a +/- 3% margin of error assuming a 95 percent confidence interval. Data for this study were collected between July 11-12, 2022. Adults in this study represent residents of U.S. states excluding Texas. A screener question was used to exclude respondents who currently reside in Texas.